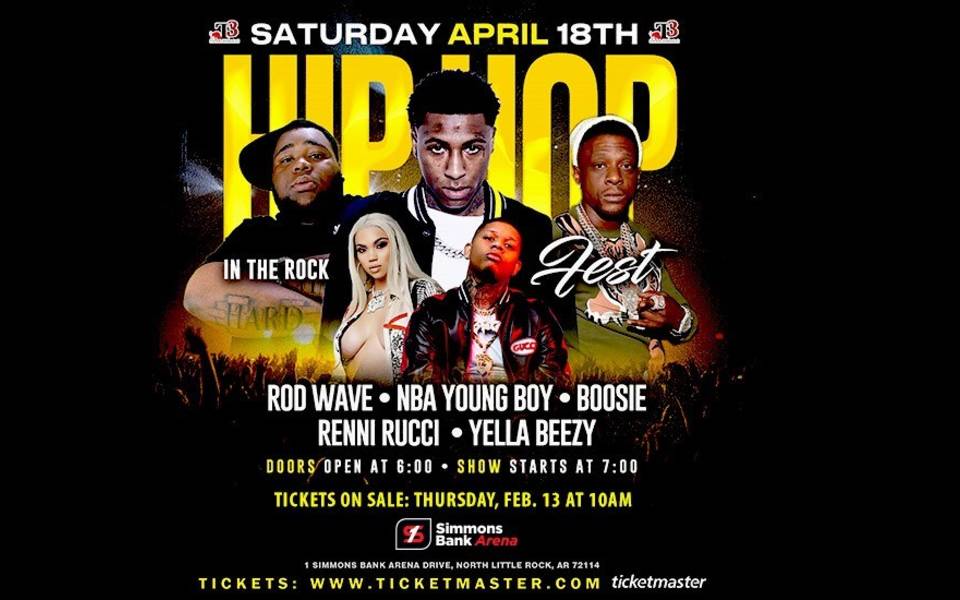 
Hip Hop In The Rock Fest Comes to North Little Rock with a Major Line Up
SATURDAY, APRIL 18 AT 7:00PM
SIMMONS BANK ARENA
TICKETS ON SALE THURSDAY, FEBRUARY 13 AT 10AM
TICKET PRICES:  $64, $79, $89, $104, $129 and $164 PLUS APPLICABLE SERVICE CHARGES
Tickets available at the arena box office or on line at http://www.ticketmaster.com. ( http://www.ticketmaster.com )
On Saturday, April 18, 2020, one of Hip Hop newest mega stars, NBA Young Boy, will headline the Hip Hop In The Rock Fest at the Simmons Bank Arena in Little Rock, AR and he’s bringing special guest. The concert will also feature hip- hops other newest stars Rod Wave, Yella Beezy, and Renni Rucci. Also, a member of southern hip hop royalty and multi-platinum artist -Boosie – will also grace the stage. This concert is scaled to be a major event for Little Rock, AR.
In addition to the excitement of the concert, we will be celebrating anniversary of one of the new mega entertainment companies on the rise, T3 Entertainment. T3 Entertainment, is the group who partnered to bring to phenomenal acts across the nation such as, Cardi B, Mary J Blige & Nas, Trey Songz & Friends and more.
Hip Hop In The Rock Fest – NBA Young Boy & Special Guest, April 18, 2020 – Doors open at 6pm and show time 7pm. Tickets on sale Wednesday, February 12, 2020 at 10 am ; for tickets visit http://www.ticketmaster.com or visit the Simmons Bank Arena box office at 1 Simmons Bank Arena Drive – North Little Rock, AR.