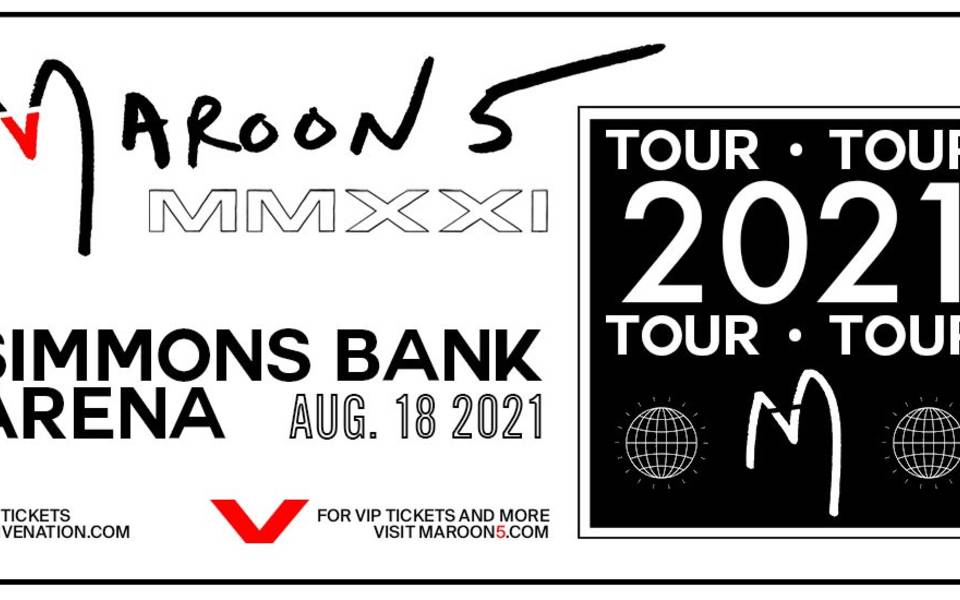 
Three-time GRAMMY® Award winning multiplatinum band Maroon 5 have announced dates for their upcoming 2020 U.S. tour produced by Live Nation. These upcoming tour dates mark the biggest U.S. shows of the band’s career, with the group playing iconic venues such as at Wrigley Field, Fenway Park, Citi Field and Banc of California Stadium. The band’s multi-country tour will kick off on May 30th at North Island Credit Union Amphitheatre in Chula Vista, CA. Meghan Trainor will appear on all show dates. Trainor will release her anticipated third studio album entitled Treat Myself, coming January 31st on Epic Records.
Tickets for the tour are set to go on sale starting on Monday, December 9th and will be available to the public on Friday, December 13th. A limited number of LaneOne Premium Packages will also be available, including amazing seats, transportation, preferred entrance and more.  Click HERE ( link ) for LaneOne details. For more information, please see tour dates below and click HERE. ( http://memories.maroon5.com/ )
American Express® Card Members can purchase tickets in select markets before the general public beginning Monday, December 9th at 12pm local time through Thursday, December 12th at 10pm local time.
Citi cardmembers will have access to purchase U.S. presale tickets in select markets beginning Monday, December 9th at 12pm local time until Thursday, December 12th at 10pm local time through Citi EntertainmentSM. For complete presale details visit http://www.citientertainment.com/.
The band’s tour announcement follows the debut of their most recent single, “Memories” ( https://smarturl.it/MemoriesMaroon5 ) (222 Records/ Interscope Records).  The release of “Memories” marks the first new music from the Los Angeles band since the release of their global anthem “Girls Like You.” Produced by Adam Levine and The Monsters & Strangerz and Executive Produced by Jacob “J Kash” Hindlin, “Memories” marks a moment of creative and personal progression for the musicians. The minimalist ballad starkly pairs a lilting clean guitar with chantable and evocative lyrics from Levine. In addition to representing another sonic side, it tackles uncharted subject matter for the group— namely loss—but from a different angle.
Following its release, “Memories” quickly claimed Maroon 5’s 22nd appearance on Billboard Hot 100’s Top 40. The track is currently holding at peak position #4 on Billboard Hot 100 chart, their 10th Top 5, and their 12th Top 10 this decade; that includes at least one new song sent into the Top 10 each year since 2011. The track just reached #1 on Billboard Hot AC chart, their 14th #1 which is the most by any act. The David Dobkin directed music video has garnered over 185 million views on Youtube; pushing their video catalog to 12 BILLION views across all official channels on YouTube.
For additional information, visit:
http://www.maroon5.com ( http://www.maroon5.com/ )
View On Facebook ( View On Facebook )
http://www.twitter.com/maroon5 ( http://www.twitter.com/maroon5 )
http://www.instagram.com/maroon5/ ( http://www.instagram.com/maroon5/ )
ABOUT MAROON 5
Maroon 5 stands out as not only one of pop music’s most enduring artists, but also one of the 21st century’s biggest acts. To date, the universally renowned Los Angeles band have achieved three GRAMMY® Awards and sold over 56 million albums, 328 million singles worldwide and earned gold and platinum certifications in more than 35 countries. The band won over fans and critics alike with the hybrid rock/R&B sound they introduced on their debut album, Songs About Jane and their double platinum album, It Won’t be Soon Before Long. Maroon 5 went on to release studio albums, Hands All Over, which featured the anthemic “Moves Like Jagger,” and Overexposed. The band’s fifth studio album, V, debuted at #1 on Billboard’s Top 200 chart and featured the #1 hit singles “Maps,” “Animals” and “Sugar,” helping the band set a record for the most #1’s by a group in the Top 40 chart’s 20-year history, with 9 in total. The music video for the album’s GRAMMY- nominated single “Sugar ( link )” has notably logged a record setting 2+ billion views to date.  Maroon 5 released their 6th studio album, Red Pill Blues, in late 2017 via 222/ Interscope. The album features the global hit single “Girls Like You” ft. Cardi B, which reached #1 at Top 40, #1 at Adult Pop, #1 on the Billboard Hot 100 for seven consecutive weeks. The track also claimed the #1 position on iTunes and Spotify, all while accumulating over 818 million Spotify streams and over 2.2 billion YouTube/ VEVO views and is notably the most-watched video on VEVO in 2018. The single also holds the record for longest reign by a group on the AC Radio chart. The band recently finished 2018 as the biggest act on U.S. radio (according to Nielsen Music). The group’s songs amassed 8.58 billion audience impressions across all monitored radio stations, which included 1.95 million plays of Maroon 5’s music. Adam Levine and the band played over 120 concerts in 30+ countries with more than 2,500,000 fans in attendance.
ABOUT MEGHAN TRAINOR
Meghan Trainor first made history in 2014 with her diamond-certified smash single “All About That Bass.” The GRAMMY® Award-winning singer, songwriter, and multi-instrumentalist stands out as “one of only five female artists to achieve a diamond certification from the RIAA”—an honor bestowed upon only 15 other singles to date. Thus far, she has garnered a GRAMMY® Award and achieved eight multi-platinum singles and two platinum albums, sold out three world tours, penned multi-platinum hits for peers across pop and country, and received countless industry awards and nominations. Expanding her influence, she starred on FOX’s hit series THE FOUR: Battle for Stardom for two seasons. Following 2018 anthems “No Excuses” and “Let You Be Ri...